Our Night Time drinks are new & improved! A comforting blend of chamomile, passion flower and natural melatonin from cherries.

Pour yourself a cup an hour before bed to fuel your rest and recovery. More of what you need

Because we are an all in one show stopper. The full range of vitamins, minerals and powerful plant phytonutrients to fuel your days. So you don’t have to buy 11 different tablets.

We're cheaper per gram of vitamin than anyone. Not to mention, we don’t bulk up our products with fillers and other harmful ingredients that most low cost vitamins do.

Our Daily drinks are made to be taken... well…. everyday 365 days a year. We have just the right amount of vitamins, minerals and plants to keep you fuelled through the day.

Our high impact Boost, Recover and Night drinks are for when you need a pick me up.

Our DailyImunity drinks make for a refreshing cold drink to have in the morning or at lunch time.

Our High Impact Boost or Recover can be had hot or cold while our Night time is best served as a hot, soothing cup before bed.

Since we are all natural we fit into almost any diet, such as:

We send tracking information to the e-mail address associated with your order once the item has shipped.

If you haven't received your tracking information, have any questions or just want to get in touch pop an email to us at - hello@tonichealth.co

We offer an industry leading 60 day, no hassle, full money back guarentee on every order.

We aim to fuel your day, not disrupt it!

We offer free, fast shipping on all orders.

I take fizzy vitamins every day and have done for years. Normally I just take Vit C with Zinc so was very happy to try this new product. Thankfully there was no evidence of mushroom which did concern me when I saw it had Reishi in the product. Its predominant taste is orange but the other fruit flavours comes through too.It dissolves quickly and is a fast, pleasant way to boost my immune system, an added bonus being a good glass of water first thing as well. 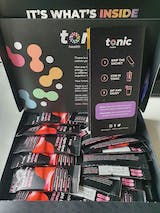 These immunity tablets are the kind you drop into a glass of water, wait for them to fizz up and dissolve, before drinking the resulting flavoured drink.I take these kinds of drinks quite regularly. During the summer I take an electrolyte one, but year round I take an immunity one as well. Although you can take capsules, I find having these dissolvable tablets kills two birds with one stone in the sense you're getting a nice amount of tasty fluid in addition to supplementing your ability to fight of illness.So, the quantities of the various vitamins in these tablets stack up well and actually beat most rivals. As it says on the label, it is high strength compared to many others I've picked up and so you have a massive dosage of vitamin A, C, D3, and E as well as Zinc; and then many other ingredients such as Reishi Mushroom Extract (a fungi that has research suggesting it could support the immune system and even help fight cancer cells) or Lipoic Acid (an antioxidant) that you won't even find in many other brands.Comparing the tablets' dissolvability to other brands I've used they were slightly below middle of the pack. Dropping them into water they fizz and dissolve relatively quickly, but I did find that there were more 'bits' left over and sticking to the glass than other brands I've used. This isn't a huge issue as the simple solution is once you've drank the first glass, pour a little more water in and mix it with a spoon. This is even easier (and maybe unnecessary even) if you take them in a sports bottle as you can simply shake the bottle once they've dissolved. Some may find this process a little annoying though or be unhappy with the odd bits floating about.So, overall, I think these tablets are pretty good. I was very happy with the large quantities of minerals, but did notice they weren't the absolute best at dissolving. 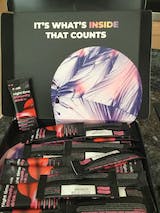 I've recently bought a bigger pack of this product as I find it's one of the best natural remedies for sleep that I've tried. also haven't gotten ill since I started drinking these but not sure if that's partly coincidence

only criticism would be a slightly chalky taste, as it's difficult to make the magnesium dissolve completely, but otherwise excellent 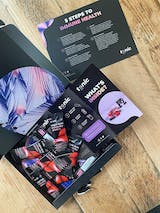 B
Baljit G.
I still have not received

I still have not received my delivery yet I am being asked to review this product?

So far so good will be ordering more

I love the taste both hot and cold.

Definite five stars, great value for money. What I would like to see is packaging that is more user-friendly and easier to read.

Despite this a strong 5 stars!

Good balance of vitamins and minerals which more than meets NRV of Vit C, A, D, E, Zinc and Selenium in each effervescent tablet. The flavour is palatable although a little 'off', possibly due to the steviol sweetener. It dissolves as a fairly opaque orange squash looking drink with a little residue but all-in-all a good immune system boosting multi-vitamin, although the price on the high side compared to some competition.

Load More
BACK TO TOP